Envisioning Planetary Futures is an LSE (The London School of Economics and Political Sciences) Master’s research project conducted by Natasha Lambert in collaboration with Factmata. A Big Data analysis was undertaken of over 435,000 social media posts from Twitter and Reddit from a six-month period spanning the U.S. Presidential Handover 2020-2021. The research aim was to investigate American beliefs of what our collective future here on Earth will look like at a highly politicised moment for environmental governance in the U.S. Natasha was awarded a distinction for the project, which was praised for its cutting-edge experimental analysis and compelling findings.

Envisioning Planetary Futures was the first time Factmata’s web-based AI product and consumer insights tool had been used for academic research. In academic spheres, the use of AI tools, such as Factmata’s, for automated natural language processing of social media data is part of an emerging research agenda. Access to such skilled technological resources required for Big Data projects is a major challenge for academic researchers. The team at Factmata made this exploratory project possible. They facilitated the data collection and provided the technical infrastructure necessary to analyse the enormous and unique data sets. Through a combination of Factmata’s topic modelling technology and my supplementary manual analysis, the climate imaginaries inherent within American narratives on Twitter and Reddit were identified.

Climate change is an unprecedented challenge and places major transformation demands on modern societies. Public understanding and support for such major transformation is critical. Climate imaginaries are powerful tools in the examination of collective beliefs about our future and what action should or should not be taken. Understanding public opinion online is particularly important given social media platforms are increasingly setting the news agenda, cultural trends, and popular narratives. Twitter and Reddit have become significant sites for large-scale and complex discourses on climate change issues. However, the number and size of information published through social media sources increases exponentially every second, making it virtually impossible to conduct analysis without technical help. Factmata facilitated the automated techniques necessary for data collection and this process unearthed rich social perceptions of climate change on Twitter and Reddit independent of researcher interference. This carries a significant advantage over traditional techniques such as interviews and public surveys which can distort public opinion due to question framing by a researcher. Automated techniques facilitate a better understanding of public opinions as they develop through social interactions and group dynamics.

The findings from the project confirm recent analysis from the Pew Research Center which shows a 60% majority consensus exists amongst the American public that climate change is a real and major threat. Despite this majority, a spectrum of different positive and negative future visions was found across Twitter and Reddit; no single climate imaginary dominated. The divergence of climate imaginaries across the two platforms indicates the multiple and varied obstacles to engaging and mobilising the American social media publics in climate politics. Factmata’s tools were easy to navigate and provided the means to conduct reliable content analysis of the very large datasets within a reasonable timeframe. In particular, the tool’s ability to contextualise the claim of a social media publication by retaining the URL link to the post’s original form added nuance and precision to the research. By using Factmata’s tools, I avoided the risk of erasing important context and wider meaning from the social media posts unlike many other Big Data studies which aim to identify macro-level trends from large volumes of social media data. Factmata’s tools facilitated more representative research and saved time for complimentary qualitative analysis which provided in-depth and holistic evaluation of the climate imaginaries found. The mixed method and experimental strategy of this project was applauded by LSE for its clean results and fascinating findings. 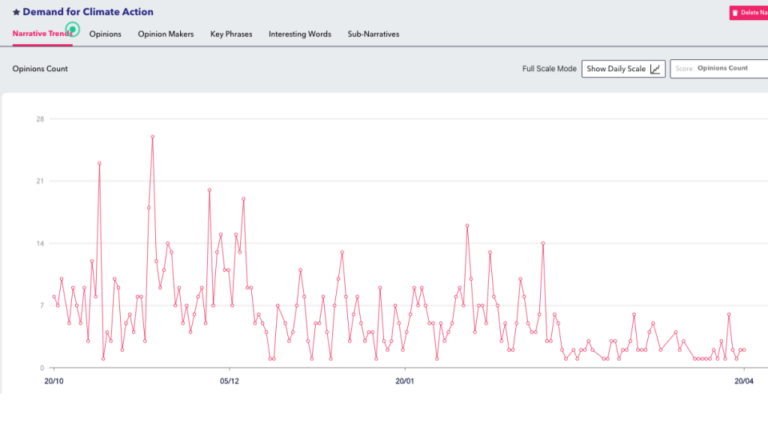 An interesting finding from the project was that climate imaginaries on Reddit tended to be more negative (61%), whereas on Twitter they were more positive (59%). More significantly, these negative climate imaginaries on Reddit were more ‘post-political’ (orientated around universal consensus) than ‘politicised’ (divisive and polarised) as on Twitter. On Reddit, the two dominant negative imaginaries were first, ‘psychological imminence’, which frames climate concerns as a crisis and a threat to humanity’s imminent temporality and second, ‘postapocalyptic environmentalism’, based on the experience of irreversible or unavoidable loss and sense that catastrophe is ongoing. The Reddit findings suggest, as Michael Mann the climatologist and geophysicist fears, that climate ‘doomism’ is a negative and paralysing attitude that has overtaken climate denial as a threat to mobilising support and action to mitigate climate change. However, in contrast the negative climate imaginaries on Twitter were more politicised, such as climate denial discourses that ‘naturalised [the] threat’ of climate change.

Automated social media research requires significant reflection on ethical considerations and technological biases, given the relative novelty of social media research and evolving policies on data privacy and security. In this research project, understanding Factmata’s company mission and ensuring it aligned with my research’s aim and ethics procedures was important. Factmata was founded on the premise of helping anyone understand online content better and protect against the growing abundance of damaging rhetoric such as harmful content, biases, offensiveness, and misinformation that can be present within online spheres. This aligned with my research’s aims to understand and identify the productive and unproductive climate change imaginaries online in the drive towards climate change adaptation and mitigation action.

If you have any questions about this project, please contact Natasha at natasha.lambert@outlook.com.